The “Black Jack Pershing: Love and War” tour’s next stop will be Monday at 7 p.m. at York College in York, Nebraska.

I will share the documentary discussion with friend and Pershing historian Tim McNeese. Tim is an associate professor at York College, has authored more than 100 history books, and is one of the experts I interviewed in my Pershing documentary.

Saturday, I had the pleasure of screening my documentary for residents in Sidney, Nebraska where I was graciously hosted by Humanities Nebraska and the Cheyenne County Visitors Committee.

Afterward, I met the granddaughter of Nebraska WWI veteran John Hornicek who shared with me some WWI photos of her late grandfather. He was one of the 2-million U.S. military personnel who served in Europe during the war.

Hornicek served in France as a medic for the U.S. Army during the Great War. He later specialized in treating several American, French and British allied soldiers at a hospital in Paris who were exposed to chemical weapons the Germans introduced and used widely in the war. You can see Hornicek’s military dog tag in the upper right corner of the photo above.

On my way back from screening my documentary in Sidney I stopped by Fort McPherson National Cemetery and paid my respects to several graves of soldiers who served under Pershing in WWI. 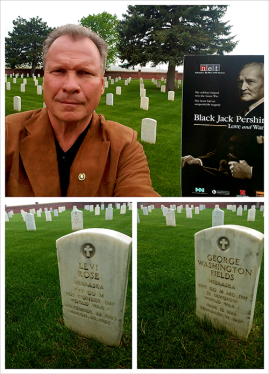 The cemetery rests in the gently rolling hills south of Maxwell, Nebraska on the former site of Fort McPherson, a U.S. Army facility established in 1863 to protect the settlers who moved west across the state on the Oregon Trail.

The military abandoned the fort in 1880, leaving behind this plot of 20 acres which was dedicated as a national cemetery in 1873.

Today, the national cemetery is the final resting place for soldiers who fought in the Indian Wars, the Civil War, World Wars I and II, and more recent conflicts.

Some of those buried here served under “Black Jack “Pershing’ in the Indian Wars and WWI.

Hope you’ll join us Monday night in York to learn more about America’s historic efforts under General Pershing’s command during the Great War.

Click here to learn more about future screening dates and places for “Black Jack Pershing: Love and War,” and to learn how to schedule a screening of the documentary in your town.

Across time: The voice of John Pershing

WWI General John Pershing's recorded voice was first heard in a speech he recorded from France on April 4, 1918. Radio stations didn't exist so Pershing's patriotic message was distributed as a phonograph record.

Five years before America entered World War II, John Pershing warned of the rising threat Naziism posed to the rest of the world.